If You Have Missed Michelle Rhee...

She Who Must Not Be Named is back, a little.

One of the early examples of how one can parlay two years in Teach for America into a career as an educational "expert," she took over DC schools, launched some advocacy groups, established herself as a major brand (the Kim Kardashian of education reform), and then--poof. Her career turned out to be brief after all. 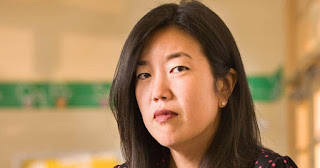 Dogged by controversy and revelations about her non-miraculous miracles, she retired to Sacramento with hubby and NBA star Kevin Johnson (who has had problems of his own). She was on the board of Miracle-Gro and a Sacramento charter school run by Johnson (apparently no longer).

Somebody has taken her up on that.

Sacramento State has an annual Student Academic Success Day. This year's is coming up on September 27. Entitled "I Fly: Resilient, Relentless and Resourceful," the day is meant "to inform and inspire students and the community to lay out a blueprint of success that fosters lifelong dreams and achievements." It will be an all-virtual event, and will include some awards (Principals and Leaders, A Woman Who Takes Flight, Optimism). There are workshops and sessions and speakers. Three of them.

And, as you have already guessed, the leaders and principals summit keynote speaker is Rhee.

Her bio for the event is creative. For instance, in writing about her appearance on the public stage as DC school chief, we're told "Under Michelle’s leadership, the worst performing school district in the country became the only major city system to see double-digit growth in both their state reading and state math scores in seventh, eighth and tenth grades over three years." Except that her work in DC, besides being divisive, turned out to be smoke, mirrors, and cheating. She saw "bureaucratic barriers as a key problem in improving the school system," which is a fair representation of the mindset of the wave of reforminess that Rhee represents, the wave of hubris-infused amateurs who believed that no rules or regulations or other human beings should stand in the way of implementing their genius ideas.

I suppose that Rhee is a fine choice for a gathering entitled "resilient, relentless, and resourceful," because she has certainly managed to just keep on swinging, even in the face of a single notable success in the field she elbowed her way into. I'm just going to hope that this is a gig of convenience and not an attempt to get back into the ed biz. If you're curious, you can register to zoom in on her address.

Posted by Peter Greene at Wednesday, September 22, 2021
Email ThisBlogThis!Share to TwitterShare to FacebookShare to Pinterest