Every so often you come across a book that unpacks and reframes a part of the universe in a way that you can never unsee. Winners Take All by Anand Giridharadas has been a book like that for me.

Giridharadas is writing about "the elite charade of changing the world," and while he is taking a broad look at the way the Betters are trying to influence our country and our world, the connections to education reform are unmistakable. I'm about to go ahead and give my grossly oversimplified take on his work and its intersection with public education; as a general guide, assume everything smart came from his book and everything wrong is my fault. There's a lot to pack into a blog post, and I will cut corners like crazy; there are so many pull quotes from this book that I have put up an entire supplemental blog post just of quotes from the work. My best recommendation if you find any of this striking is to buy the book. 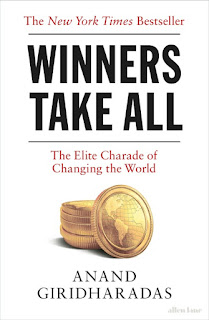 But nowadays we have all sorts of elites that make noise about making the world a better place. But here's what they do-- they say, "Boy, two donuts aren't many for the two of you. Let's fix that. I'm going to start a foundation  that will teach you how to better stretch a donut." Or "I'll offer grants to buy donut knives to cut the donuts into neater pieces (and my company will make the knives)." Or "I'll cut these up for you, because I have a much better understanding of donuts than you do." Or "I'm going to fund some programs to teach you how to better control your hunger, because if you had that kind of personal strength, you wouldn't have to care so much about the donuts." Or, "I'm going to generously give one of these guys part of a donut. Call the media to catch this heartwarming story."  Or, of course, "If you had a better education, you would have more donuts."

What the Ten Donut Crowd won't say is, "Let's take a look at the system that divided the donuts up this way in the first place." Or "Let's use our democratic traditions and institutions to settle this fairly."

The elite assumption is that the system that put them on top, the game that they are the winners of, is fair and just and unrigged and not in need of being changed in any major ways. They are not part of the problem, and they are hurt that you would even suggest that was true; they are simply the just winners in a meritocratic system.

So the solutions they will propose meet a couple of standards:

1) It will include no challenge to the fundamentals of the current system.
2) The elites will be in charge (because their eliteness is proof of their fitness to run the show).
3) It will harness entrepreneurial energy (i.e. someone's going to make money from it).
4) It will hand most of the blame responsibility to the people on the bottom who are being "rescued."

I have a ton of quotes collected from this book, but I'm just going to put these two right here:

The initiatives mostly aren't democratic, nor do they reflect collective problem-solving or universal solutions. Rather, they favor the use of the private sector and its charitable spoils, the market way of looking at things, and the bypassing of government. They reflect a highly influential view that the winners of an unjust status quo-- and the tools and mentalities and values that helped them, win-- are the secret to redressing the injustices. Those at greatest risk of being resented in an age of inequality are thereby recast as our saviors from an age of inequality.

For when elites assume leadership of social change, they are able to reshape what social change is-- above all, to present it as something that should never threaten winners.

The fingerprints of this mindset are all over education reform.

* The very notion, popular and bipartisan among the Betters, that education is the fix for everything. All the socio-economic inequity in the country can be solved, not by looking at the system that created that inequity-- in fact, we're not even going to admit that the system had any hand in creating inequity. No the system is swell, and the winners are people who are at the top got there by hard work and wisdom and meritocratic excellence. So, no, we don't need to look at that system-- we just need these people on the bottom to get themselves better educations (including things like grit) so that they can win at the game, too.

* Think Bill Gates, deciding that he needs to rewrite and standardize public education, and will have to circumvent, subvert and co-op the actual government to do it. Nobody elected him Grand Poobah of US Education, but he is perfectly comfortable appointing himself to the job.

* Think the deification of business standards in ed reform, and the notion that the free market will fix the system, that we will know which ideas are working best because they will succeed in the market. Think Eli Broad's assertion that schools don't have an education problem, but a business management problem.

* Think the repeated notion that democracy is a problem in education. We need to get rid of elected school boards and we need to give school leaders the kind of freedom that an all-powerful CEO has to create his vision. In ed reform, local control and the democratic process are to be avoided.

* Think the constant rejection of expertise. Reformsters don't need to talk to teachers. What do teachers know? (If they are really such great shakes, why aren't they rich?) I've succeeded at the game, and the same wisdom that made me a winner at that game will apply to fixing education. No other sorts of wisdom are necessary.

Now, you may be thinking, what about charter schools? Don't those totally disrupt the status quo? Don't those challenge the system that created the inequity that has marked public education in this country?

I say no. No, they have exactly not done that.

The US education system suffers from inequity that's systematically embedded in the link to real estate taxes. Buy a rich house, get a wealthy school. We've also got a variety of mechanisms in place that minimize the degree to which taxpayers have to fund schools for Other Peoples' Children.

Charter and choice systems don't propose to change any of that. What they propose is to offer a pathway by which a few families may be able to move their children around a bit, in hopes that they can find an available school a few steps up the inequity ladder (but of course no voucher or charter system will get a poor student into a wealthy school, private or public). Meanwhile, the fundamental structures of inequity remain in place, in some cases actually made worse by the creation of a charter or choice system.

Charters and choice check all the boxes. Nobody who has privilege has to worry about losing any of it or even having it challenged. It circumvents government and democratic processes. It applies what Giridharadas calls MarketWorld principles to education, turning schools into businesses. And it keeps the responsibility for getting a good education (and through it, "escaping" poverty) on the families themselves. And much of the rhetoric surrounding charters keeps us from distracted from what is not actually being challenged at all.

Seriously, read this book. It's sharp and insightful and filled with profiles of the people who operate in this world of elite largesses.

Posted by Peter Greene at Saturday, June 15, 2019
Email ThisBlogThis!Share to TwitterShare to FacebookShare to Pinterest