Yes, everybody is talking about the detention of immigrant children by US authorities. I'm going to talk about it, too, because this is federally-mandated child abuse, and it's not okay. If you're a little fuzzy on exactly what happened to create these new abuses (child detention) in a long-standing situation (immigration with varying degrees of legality) this short excerpt from Slate's explainer handles it pretty well: 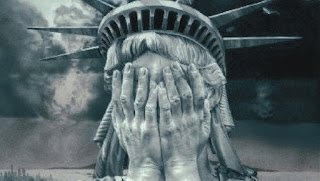 First is the new policy that any migrant family entering the U.S. without a border inspection will be prosecuted for this minor misdemeanor. The parents get incarcerated and that leaves children to be warehoused. The parents then typically plead guilty to the misdemeanor and are given a sentence of the few days they served waiting for trial. But then when the parents try to reunite with their children, they are given the runaround—and possibly even deported, alone. The children are left in HHS custody, often without family.

Second is a new and apparently unwritten policy that even when the family presents themselves at a border-entry location, seeking asylum—that is, even when the family is complying in all respects with immigration law—the government is snatching the children away from their parents. Here, the government’s excuse seems to be that they want to keep the parents in jaillike immigration detention for a long time, while their asylum cases are adjudicated. The long-standing civil rights case known as Flores dictates that they aren’t allowed to keep kids in that kind of detention, so the Trump administration says they have to break up the families. They do not have to break up families—it is the government’s new choice to jail people with credible asylum claims who haven’t violated any laws that is leading to the heartbreaking separations you’ve been reading about.

Here are some other articles about the how and why of immigration policy involved:

From an ACLU attorney. From the Bipartisan Policy Center. From Vox (so, plain English).

If you want to share with friends and neighbors and strangers on line some specific pictures of just how bad it is, here are a couple of articles for that:

From the Associated Press, a tour of one detention center.

Coverage from Texas that shows just how crazy the whole thing is (the "legal" path to crossing is actually locked).

From The Hill. And here's a piece about how some get to enjoy a mural of Beloved Leader.

Here are things I don't want to argue about:

How this is typically American and we have done terrible unjust things to people before. This is true. It is all the more reason not to let it go on now. This is happening now. We can do something now.

The parents caused this by bringing their children here. No. Just no. This is the same bullshit as an abuser who punches their victim and then says, "Look what you made me do." This is on us, our government, the party in power.

Their parents broke the law. So what. First of all, as noted above, mostly we're talking misdemeanors which means this is not the same as what happens to someone who was convicted of murder-- it's like taking the kids away from someone who was caught jay-walking.

The bullshit claims that the feds had to do this because evildoers were pouring across the border, because every brownskinned person is a member of an evil gang and a rapist and murder and we must get rid of them all. This is just racist bullshit with no foundation in reality (just like all racist bullshit).

The Bible. A complete non-starter, and the fact that it has even come up is a sign of how far removed from any serious religious or spiritual thought this administration is. Do we really have to point out that the Bible justified the Inquisition, slavery and a lot of other bad stuff. But if you want a religious take on it, here's what the United Methodist Church (the one that Jeff Sessions nominally belongs to) has to say in condemnation. And here's a Twitter thread listing the many religious condemnations of this.

This shameful policy is part of a larger initiative-- to cut back the number of brown people coming to this country by making this country so unwelcoming, so cruel, so much worse than what they're trying to escape that coming to America will be unattractive. That's now our policy, our new unofficial motto-- "If you aren't white, it sucks to be here and you might as well not come." That's as stark a betrayal of our national ideals as we've ever seen in our long history of not living up to those ideals. And every gutless member of Congress who can't find the spine to say so needs to face trouble at the polls come the fall. And really, when this is done, all of us who are worked up about it need to ask if there aren't perhaps other equally huge but less visceral injustices being perpetrated that we should be throwing our energies against.

But that's the big picture.

Right now, the US is sticking children in detention. I don't care for the emphasis on "in cages," which suggests this would somehow be better if cages weren't involved. It wouldn't be. This is not okay and it needs to stop now. Call your representative in DC.

The Slate article has a great list of groups who are doing the work and who can use support. Help them.


Posted by Peter Greene at Monday, June 18, 2018
Email ThisBlogThis!Share to TwitterShare to FacebookShare to Pinterest