The Big Engines That Wouldn't

The Board of Directors has reacquainted me with a host of kid lit classics, including the 1930 classic, The Little Engine That Could, written by Watty Piper, which was a pseudonym for Arnold Munk, cofounder of the publishing company. There are also some newer abridged versions (Piper can be a little verbose and repetitive--always a problem when you're your own editor/publisher) which we like here at the Institute

You know the story, and you probably focus on the can-do attitude of the little engine that I-think-I-cans her way over the mountain. Hurray for grit. 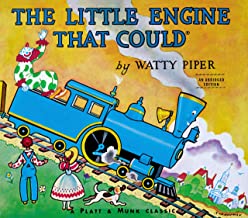 But there's another aspect of the story that is constant. Three other engines have the opportunity to help the train (loaded with toys and good food for the good children on the other side of the mountain) on its way after its original engine conks out. One is a powerful shiny new engine, the next is a big strong engine, and the third is a tired old engine (they are all presented as male).

These three engines make their appearance to further the plot, underlining the helpless plight of the powerless train. But after reading this story a few hundred times. I get disappointed that the big engines that wouldn't are not part of the lesson. Taking food and toys to children is women's work, and nobody seems to question the refusal of the big engines to help out. There's no comeuppance, no moment when they look on in shame at what they've done, or refused to do.

Yes, if you've got a problem right now, you solve it with the resources you have at hand right now. It's a waste of time to bitch about how you shouldn't be dealing with the problem in the first place. But at a minimum there should be a lesson learned about systemic issues that need to be addressed before the next crisis rolls around. How many patients didn't raise enough Go Fund Me money? How many schools still lack sufficient technology? How many other trains never got over the mountain at all? And how much did it cost the little engine that could to do the damn job all by herself?

Where's the part of the story where the station master tells the big engines, "Dammit boys--if you can't help out around here, then maybe we'll just have to redirect some of your supplies." Or "That job is just as important as any other, so we're making some assignment changes right now, and I'd better see some attitude changes to go with them."

We should celebrate the strength and determination of all the folks that marshal their resources and pull through in the clutch (and that includes most teachers on most days), but we should also be talking about the big engines that stand back and claim that their privilege is a shiled against any obligation to help pull the weight of making society work.