The Broken Promises of Tech

So, here's how I've been spending my evening.

I had a whole batch of photos that I wanted to upload, but after investing a chunk of time this morning and this evening, that whole project crashed into a bunch of disconnected bits floating off into the cyber-ether. 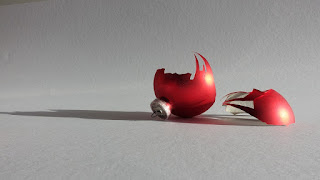 I took the somewhat passive-aggressive step of tweeting my displeasure with my provider (Verizon DSL-- don't tell me to switch to someone better because first, there's nobody all that better and second, even if there is, there is nobody better in my rather rural area). As usual (this is not my first disgruntled cyber-rodeo) that grumpy tweet flushed out a corporate bot who wrangled me up the line until I was chatting with what appeared to be a live human.

My problem, according to me-- speed tests on my end show upload speeds that graph like badly battered comb, and upload speeds are so low that the test just times out. Hence my inability to upload my pictures.

My problem, according to the tech-- I'm trying to use my wireless internet connection wirelessly. Other devices or objects or neighbors or bursts of cosmic rays could cause the wifi to weaken as it drags its way the ten feet across the room. Verizon can really only guarantee the wireless speeds that I purchase for devices that are actually wired to the router.

But this is often how tech promises go. "This will do awesome things," the tech engineers declare, "At least, it does awesome things in our lab with brand new tech and controlled conditions and a support group of twelve highly trained computer whizzes."

I am no Luddite. In fact, the post I was going to write tonight was in defense of one-to-one computing. But I also believe that the only reliable thing about tech is that it will reliably promise more than it can actually deliver in the real world.

That effect is magnified in school settings-- I'm pretty sure that all those dollar signs dancing in their heads make it hard for tech bosses to see how things will actually play out in the real world, where users are piled on top of each other like cordwood, spread around buildings that are built like bunkers (if you ever need me for an emergency, do not try to call or text me by cell while I'm working-- I'm pretty sure no radiation of any sort can penetrate my school).

I recognize that these complaints are 50% whining, the noises that children make because the miracle is not happening fast enough, miraculously enough. I recognize that I'm complaining that I can't perform my magic trick with as little effort as I had hoped.

But I also know we live in an age in which many tech types are promising even greater magic for schools, that we will soon (soon!!!) be able to plunk children in front of screens and those screens will spit out educational programs perfectly tailored to those children, while magically educating each child perfectly and personally, while miraculously collecting tons of data about those children, while also miraculously keeping that data totes secure and safe. Whether these promises should be kept is one discussion worth having, but whether they can be kept is perhaps a better one, because tech makes promises it can't keep, and we end up with things like wireless internet that really works better if you don't use it wirelessly.
Posted by Peter Greene at Monday, March 27, 2017